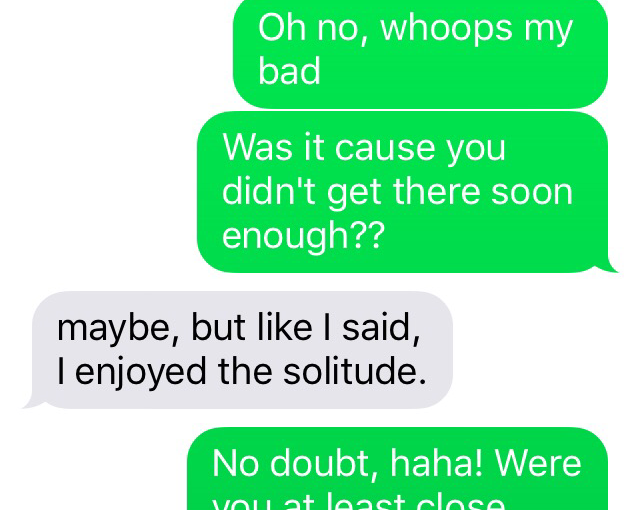 A recent visit from my folks proved to be pure entertainment filled with uncontrollable laughter. Anybody who is privy to my family dynamic knows that my mother is usually the butt of our jokes. Our lack of sympathy and inability to spare her for our own entertainment proves to be quite laughable and unique. My father and I have the same dry sense of humour which entails brash sarcasm so we very much feed off one another. Unlucky for you guys I didn’t clue into writing down the antics of this visit until the last two days so I’ll do my best to share a few juicy ones. Bare in mind that the humour in all of this may not register for the people who have yet to meet my mother in person.

~Proceed with Caution
My brother calls a few days before my parents arrival in an attempt to warn me of my mothers current state. He reminds me to be patient and kind to her but we both already know if anybody in the family can handle her these days it’s me because I have little to no contact with her. He also claims that he is good with her but in all honesty that’s only if he’s sober, haha! Otherwise he is known to get in some harsh one sided religious quarrels with her. They are one sided because it’s him drilling her while she tries to ward him off. I have 5 siblings so you will soon come to see that the dramatics of my family is slightly fucked up but thoroughly entertaining.

~Dashed Dreams
When my folks arrive you bet your ass my dad has a story about their plane ride. Apparently when they checked in they realized they weren’t seated together and instead of my dad remedying the situation for my mother he found himself texting my sister, celebrating his victory. He clearly underestimated my mother whom got on board and immediately started to solicit the help of others to accommodate her needs. The way my father describes this classic situation to his brother over the phone has me doubling over in laughter.
“They literally moved five people around on the plane to get us to sit together. That god damn Westjet, that’s how friendly they are. They had all these people moving around.”
”Oh I guess your wife is really anxious when she flies.”
“Ya that’s why I don’t want to sit with her.”
“But we ended up together anyways so it was a horrible flight.”

~She is oblivious
When I am getting my parents settled into their room my mother realizes that she won’t be able to get into the bed. My bed has a pretty high frame and she only stands at maybe 5’ and 200+lbs. I tell her I’ll get a stool and she brushes me off saying that it’ll be ok because my dad will help her in and out of the bed. My dad and I dart one another a look of horror. Let’s just say I planned to save my dad’s back and quickly retrieved a stool with a huge smirk across my face.

~I got skills
My father and I had plans to make a day trip up to see his brother. My mother “thinks” she wants to come and it doesn’t take much for me to convince her otherwise. Obviously I am mindful and kind in my efforts but lets just say there is no fucking way in hell I was going to be stuck in a car with her for three hours on top of her being part of the visit. Basically this woman isn’t mentally or physically fit anymore. Wait, I’m not sure she ever was but either way she should only be taken in small doses.

~My #1 Meng
While on our day trip up to see my Uncle, my dad and I talk non stop, we have a lot to catch up on. I haven’t had a one on one, face to face visit with him in a year. When I lived in our shit hole of a small town I used to try and have lunch or coffee with him on a daily basis, I miss the old man. I’ve been gone for almost eight years and I only get to see him once a year if I’m lucky. As I’ve grown into adulthood I have found myself able to speak my truth to him in the most honest and straightforward manner imaginable. I am lucky to have such a deep connection with him. Of course there are details and stories I spare him, I mean he is my dad! Anyways as we are driving back home I find myself telling him that I’m bisexual and that I haven’t found that chick who’s made me full blown lesbian yet. Believe me this isn’t as awkward as one may think, it was like conversation in passing, likely due to the fact that my brother is gay and has already paved the way so anything to follow isn’t that big of a deal. Thanks for that bro, love ya!

~Icky
At one point I am at the park with my dad and my little. A couple strolls by and decides to strike up a conversation with us. The woman eventually says, “And who are you guys,” gesturing at the three of us, clearly wondering our relation to one another. I will paint you a picture. My dad is a 60+ caucasian male, I am a 30 something asian(half) female and my little has blonde curly hair. No lady I ain’t his male order bride!

~Senile
We are downtown and my mother is adamant we find a Chinese bakery so she can get her fix. Once inside the bakery my mother is distracted and talks nonsense to the person trying to assist her. I have to intercept as my dad grows impatient out of embarrassment. Not only do we have two actual children with us, my little and my nephew, it is becoming obvious that she is no doubt the third. She’s pointing and muttering about the deserts in front of her. I have to get “down” to her level and start speaking clearly and loudly, interpreting her needs to the bakery assistant. Noise seems to distract her even more than the tasty deserts in front of her so I have to sternly ask the rest of my party to be quiet so I can assist her in getting what the fuck she wants so we can get out of that small confined space before my dad figures out how to build a bomb and blow that shit up. He has zero patience for her when she embarrasses him. You can only imagine why my dad loses his marbles once and awhile considering he has to deal with her on a daily basis. I finally get her to pick what she wants and I herd everybody out the door. Once outside I sympathize with my dad in the fact that he is caring for a child. He makes light of the situation and tells me he just distracts her with chocolate or something shiny to get her attention while he is gesturing as if throwing seed on the ground for a bird. He has me in stitches because the sad reality is that it’s seriously true.

~Coincidence?!
As my mother zones out on a Netflix series my dad and I find ourselves deep in conversation. Every once and awhile my mother throws her two cents in which surprises me considering her attention span is of a spastic dog. At one point my dad is telling me about my brother in laws mother who is quite sick and my mom loudly and abruptly says, “They should just shoot at her!” I can’t even begin to portray the look of utter shock and disbelief on my face. My dad quickly interprets her craziness saying, “She’s talking about the show she’s watching!” Talk about the best coincidence ever!!! This was indeed one of the most hilarious scenarios in their whole visit. My father and I repeatedly and randomly double over laughing about it the rest of the trip. We use the phrase, “They should just shoot at her!”, any chance we get.

~Pure cheese I tell ya
We are at the beach and my mom is telling me about the beaches back home saying,”Some of the beaches…” and my dad interrupts her. *Insert Italian accent* saying, “Son of a bitches!” I fall to my knees laughing. I walked the next stretch of the beach laughing out loud, on the verge of tears. This is likely due to the lack of sleep and possible traces of alcohol still in my system but it was hilarious non the less. Google “The Italian man who went to Malta”

I am digging around in the fridge and hear a car alarm going off. I question if it could be my car and my mom pipes up and says, “It’s probably the fridge!” Say WHAT?!

“I just saw a bird and thought it was a plane!” How the fuck?

My dad hands my mother the menu at the restaurant and she says, “What’s this?” Seriously?

As we are pulling into the airport my mom is insisting for the umpteenth time that she needs to get a seat next to my dad. My dad mumbles from the back seat but I can’t quite hear him over the music and my brain registers something completely out to lunch, “Ya, ya not before I punch you in the tits.” I was dying of laughter. He actually said, “Ya, ya before we punch the tickets.” It was clear that we were all exhausted by this point in the day. Farewell folks, until next time!